What are communities of interest (COI)?

Previously, redistricting in Michigan has often been marred by "gerrymandering," where political representatives designed electoral districts to maximize their own political power. But in 2018, Michigan voters took the enormous step of changing the approach to redistricting in our state, removing it from the purview of the state legislature, and placing it instead in the hands of a new Michigan Independent Citizens Redistricting Commission, composed of a balanced bi-partisan/non-partisan group of 13 randomly selected Michigan residents.

While there is no set definition of COIs, we think of a COI as a group of people in a specific geographic area who share common interests (such as economic, historic, cultural, or other bonds) that are linked to public policy issues that may be affected by legislation. CLOSUP's research suggests that COIs can consist of religious, ethnic, or immigrant communities, neighborhoods, people in tourism areas, regional media markets, outdoor recreation or natural resource areas, economic zones, and much more.

Examples of COIs include:

CLOSUP's 2020 recommendations to the Michigan Independent Citizens Redistricting Commission (MICRC) identified potential concepts and definitions of COIs based on experience in Michigan and across the U.S., and as handled in the academic literature; potential COIs in Michigan, and how to make them aware of the role of COIs in Michigan's new approach; how other states and the courts have addressed COIs in redistricting; and best practices that the MICRC might consider as it plans its work in the redistricting process.

How can COIs get involved?

Since the concept of COIs is new and not well-understood in Michigan, CLOSUP encourages all COIs to engage in this process, learn more about it, and consider submitting their information and preferences to the Redistricting Commission.

We are partnering with other stakeholder organizations to foster better understanding of the state's new process, the role of COIs, and engagement by COIs that want to represent their interests in the upcoming redistricting process. Contact us for more information: closup@umich.edu. Or explore our COI resources. 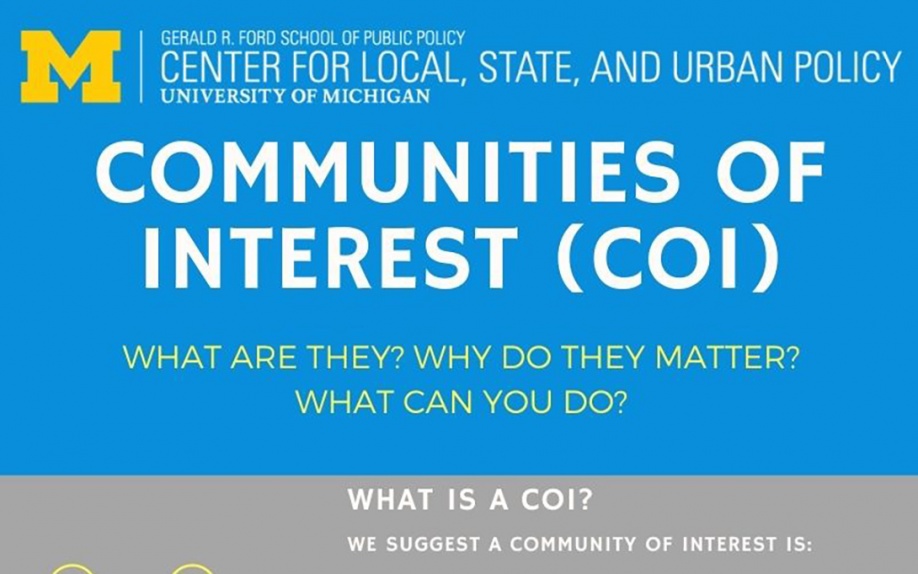 What are COIs? Why do they matter? What can you do? 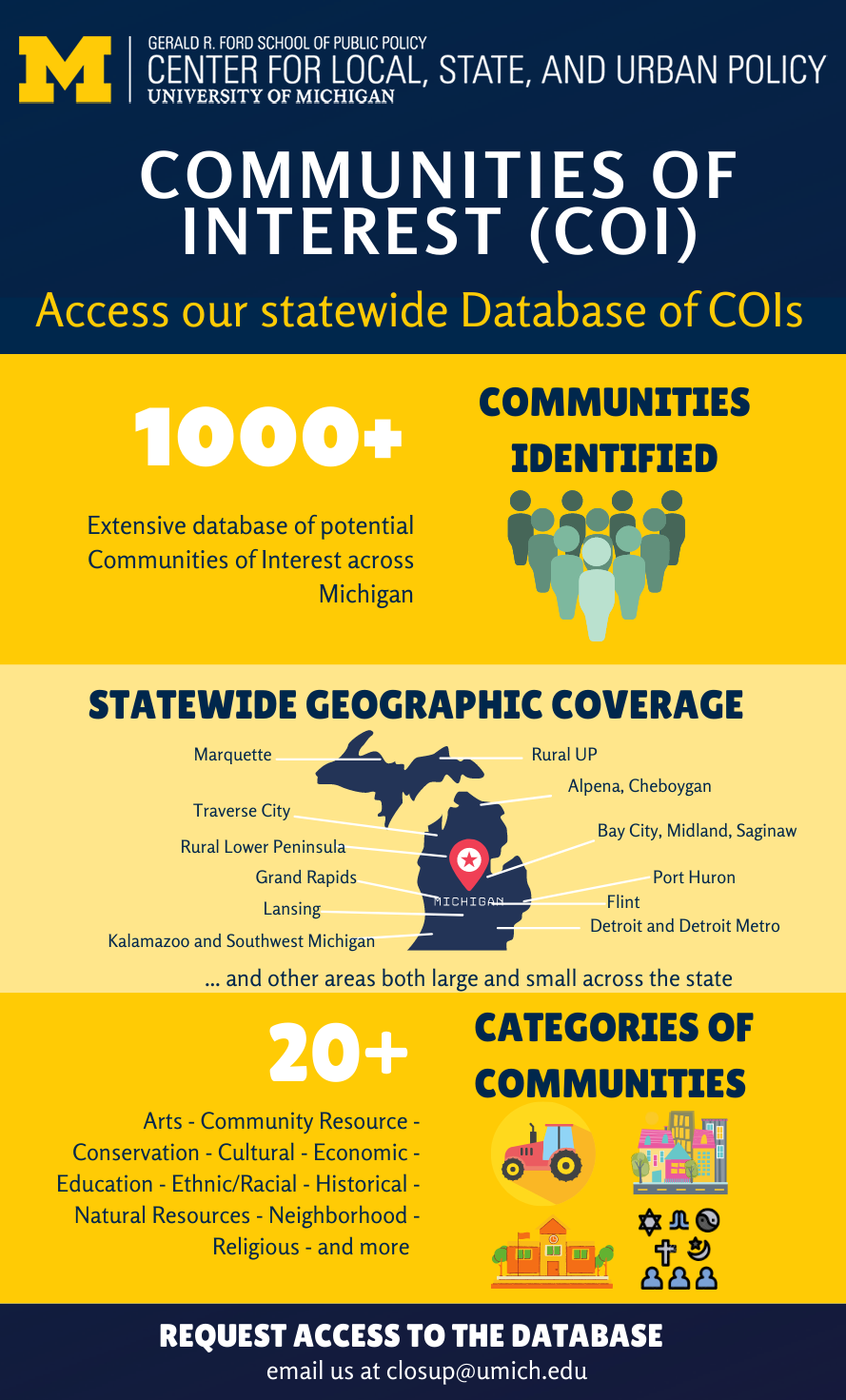 CLOSUP's contact database of potential COIs in Michigan is the first of its kind and a first attempt to identify the breadth of COIs so they may be engaged in the state's redistricting process. To date, the database houses information on more than 1200 possible COIs all across the state, representing 20+ categories. The database is not publicly downloadable at this time, however, if you are interested in using the database to engage COIs in the redistricting process please contact us by email at closup@umich.edu.
Learn more

Panel discussions on communities of interest

In the fall of 2019, CLOSUP hosted a panel discussion with experts on the topic of communities of interest, and opening remarks by Michigan Secretary of State Jocelyn Benson. A video recording is now available.

CLOSUP hosted a webinar on Michigan's new approach to redistricting and how communities of interest can engage with the Commission on February 25, 2021. Watch the video recording.

The COI database includes over 1200 potential communities of interest across the state.

COIs in Detroit and Metro Detroit

A large number of potential communities of interest were identified in Detroit and the surrounding areas.

The database includes communities across the state, including in the Upper Peninsula.